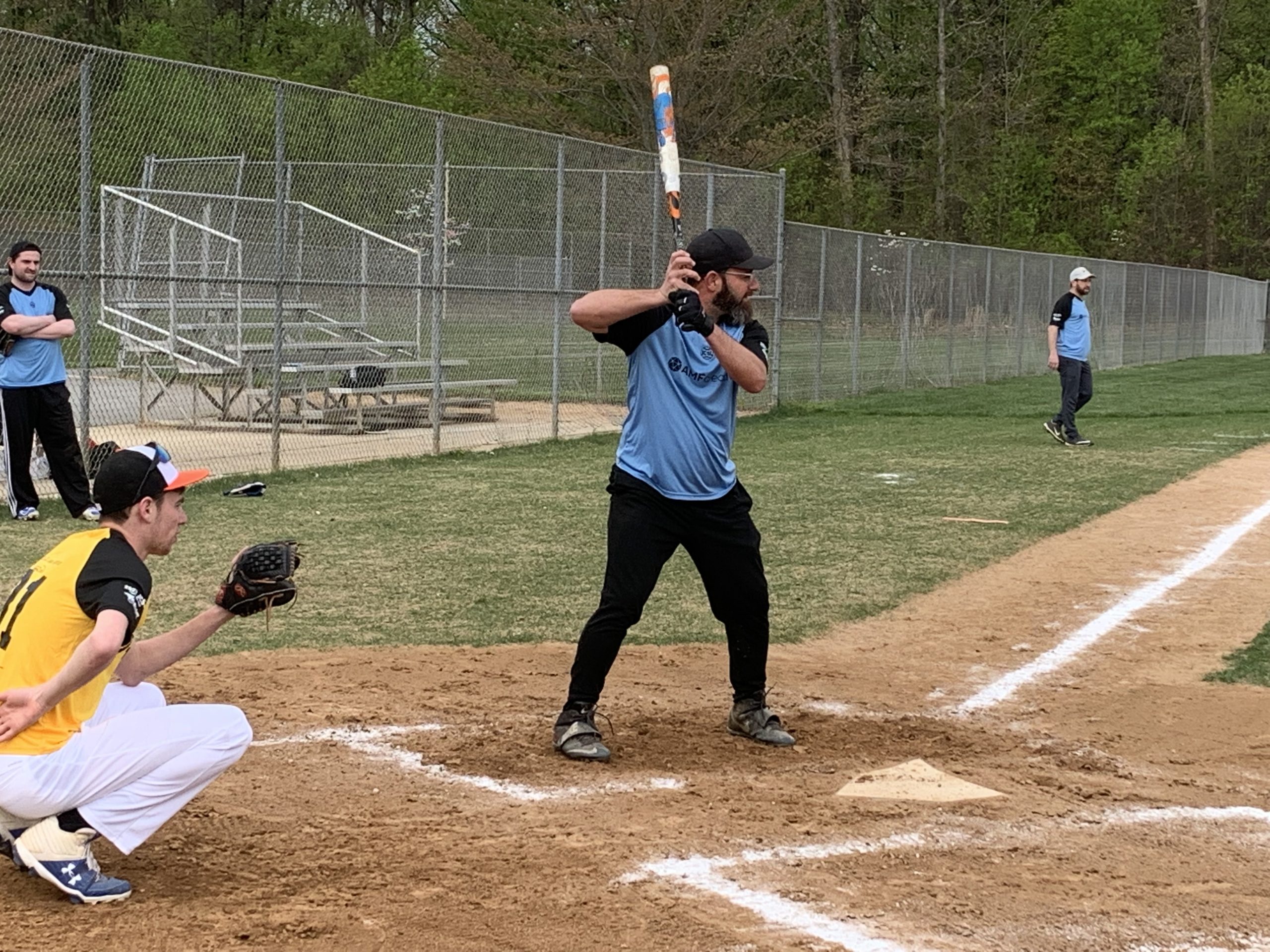 JCSL by Shimz Cars kicked off their fourth annual season at the Northwest Regional – by
Fired Up Promotions fields.

Teams shows up to the fields by 9:30 AM and were provided with league equipment to include bases, balls, catcher’s masks, etc. sponsored by Premier Financial.

All nine teams will compete for eight regular season games, with the top four teams facing off in a round of playoffs. The playoffs winners will then battle each other in the Camp Shoresh championship.

Continue below for some of the excitement from the first week of the season.

Stutman Chiropractic opened their season with an exciting thriller.

Things looked concerning for the “back crackers” after PsychCare took a 6-0 lead in the top of the first. But the Chiropractors refused to be intimidated by PsychCare’s head games and cut the lead to 6-4 a few innings later. After trading lead changes throughout the game, PsychCare was up 15-11 going into the bottom of the 8th. But that’s when things started to turn around.

In the bottom of the 8th, Stutman Chiropractic worked some pitch counts to load the bases on a series of walks and were able to end the inning only down one run. After holding PsychCare scoreless in the top of the 9th, the table was set for a walk off win for the “spinal adjusters.”

Stutman Chiropractic led off with a single followed by an Aron Meister double, putting men on 2nd and 3rd with no outs and the winning run on second. All-Star (and potential come back player of the year) Jeremy Lasson came to the plate and pulled a line drive in to left, scoring both runs for the exciting walk-off win.

During the long off-season, the LBSI front office primarily focused on the business of running a professional softball team. The first order of business was negotiating the reacquisition of the team naming rights from www.thecolumbiagroup.net.

With the identity of the team firmly re-established and purple shirts secured, management turned their full attention on re-building a contender to defend its 2021 JCSL championship title.

But all the positivity and momentum is as good as the next-day starting Pitcher and for the first 8 innings, Believe and Achieve’s Tali “The Strong Man” Strum completely shut down the former champs. Dominated by numerous Gold Glove plays from Meir Parry, Binyomin Goldenberg and Moshe Burr, as well as some relentless hitting by Avi Safren, Yaakov Spatz and Moshe Tuchman, LBSI found themselves down 13-7 going into the ninth inning.

However, things turned around for LBSI in the 9th as they sent 17 men to the plate in the inning, scoring 7 runs. LBSI is humbled and very thankful for the miraculous turn of events.

Worthy Insurance, an expansion team from Chicago, wasted no time introducing themselves to the league as they defeated KD Gold & Coin Exchange 23-9 in dominant fashion.

Pitcher Dany Donaty took the mound for Worthy in the top of the first, his first career start in the league, and didn’t give up a run. The Worthy bats came alive in the bottom of the first, scoring 4 runs on 6 hits, highlighted by a 2-run single from Asher Sondhelm and a 2-run double from Shalom Ryback. After Donaty had a 1-2-3 inning in the 2nd, Worthy scored 6 more runs in the bottom of the 2nd (on 7 hits), this time with RBIs from Eli Newman, Yoni Finkelstein, and Eli Dollman and a 3-run HR off the bat of Chaim Finkelstein.

KD got on the board in the top of the 3rd, scoring 3 runs. But Worthy scored 5 more (on 8 hits) in the bottom of the inning, with RBIs from Noson Berman, Danny Weissman, Yoni Finkelstein and 2 RBIs from Oren Bluman. With Worthy leading 15-3 in the 4th, KD showed some life. After an error, they had a few hits, a couple walks, and added 5 runs to cut the lead to 15-8. But the Worthy bats stayed red-hot in the bottom of the 4th. They scored 6 more runs on 7 more hits, this time with Navid Raoofian, Noson Berman, Michael Neuman, Eli Newman (x2), and Oren Bluman supplying the RBIs.

After another 1-2-3 in the top of the 5th, Worthy only needed to score 2 runs for the game to end with the Mercy Rule. Yoni Finkelstein led off with a single and advanced to 3rd after an errant throw. His brother (and Worthy Employee of the Month), Chaim Finkelstein, singled him home. Eli Dollman then doubled and Shalom Ryback scorched a ball to the outfield to walkoff the game. This was a true display of a team win as all 12 players scored and 11 players had RBIs for Worthy. As a team, they scored 23 runs on 32 hits in only 4+ innings!!

Donny Ankri Architects showed up for opening day ready to play. They got off to a hot start, scoring 5 runs in the first. AMF immediately answered with 5 runs of their own in the 2nd. However, DAA responded, scoring runs in almost every inning during the game. DAA’s two through six hitters went 17 for 22 hitting combined, as they cruised to victory.