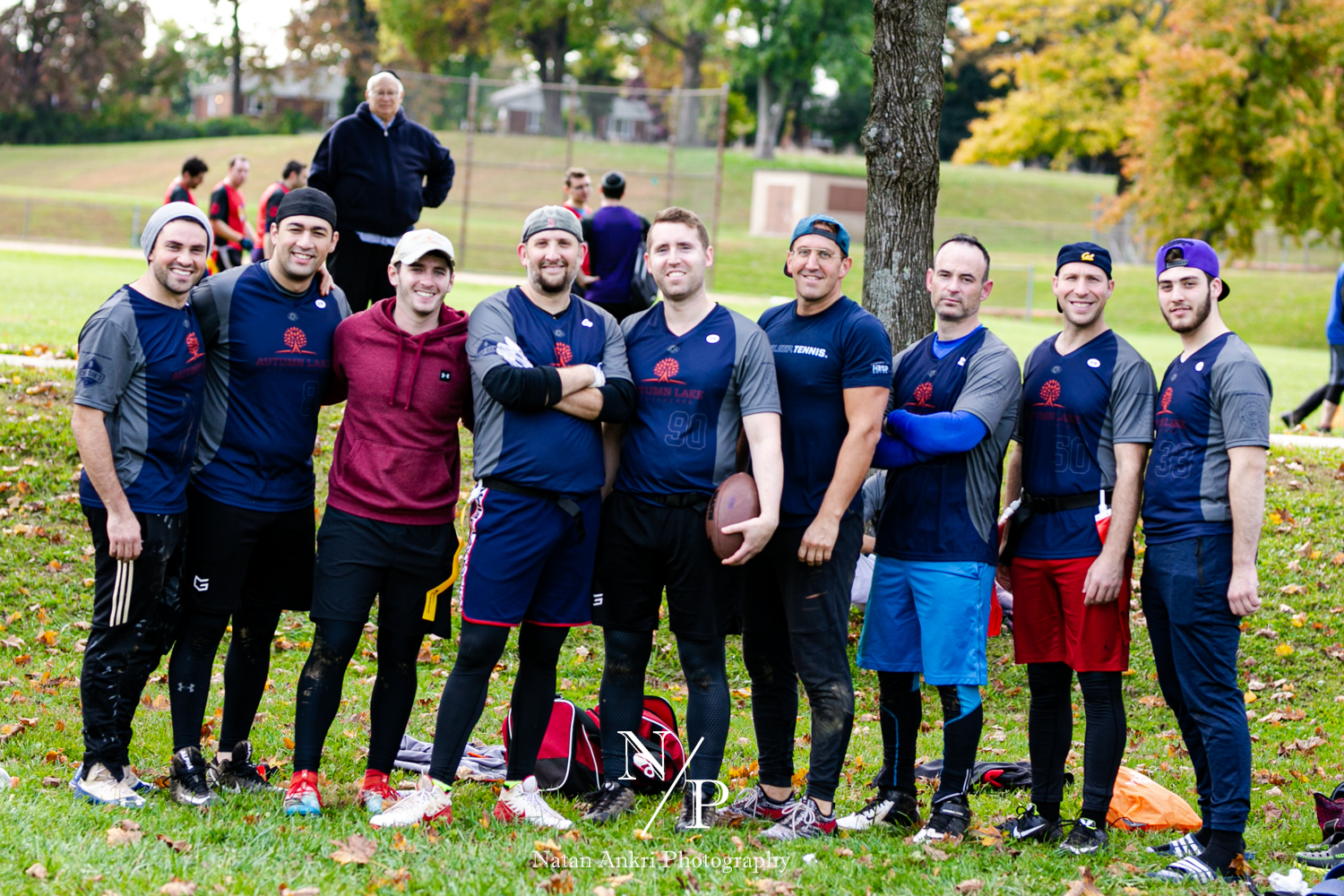 On a beautiful Sunday morning in mid-September, “JCFL by Shimz Cars” began its 11th season.

Following the draft, teams were provided with their team jerseys, thanks to Computer Cure, MD. They also spent quality time meeting the 2022 IV Drip Officiating Crew who along with officiating duties, prepped the ActualEyes fields (at Pikesville Middle) with Stanley Markovitz Orthodontics equipment for the 2022 season.

Like previous seasons, all eight teams will compete for seven regular season games, with the top four facing off in the playoffs. The playoffs winners will then battle each other in the league championship, The Chef Dan Bowl.

For a recap of some of the excitement fromthe first few weeks of the season, keep reading:

In the season opener, rookie QB Moshe Burr and his team took on third year QB Ezra Bregin and his Sushi Sakura crew.

Allstate – Yaakov Schmell was rolling from the whistle, with an early deep ball TD pass to David Pensak and a fadeaway TD to Avner Shotz, putting the insurance experts up 13-6 going into the half.

But with some halftime adjustments, Bregin and his team turned things around, securing two TDs to TE Avraham Mond to go ahead 18-13. With under two minutes to go and 1st and goal at the 1-yard line, Sushi Sakura kept Allstate – Yaakov Schmell out of the end zone to hold on to their lead and secure the win.

In a matchup of 2 championship hopefuls, Autumn Lake scored the go-ahead points with 20 seconds left on the clock, thanks to a 4th down TD pass from Avi Yudkowsky to Rafi Strum to secure a 26-22 victory.

For much of the game, it looked like Worthy Insurance would cruise to victory. Though Autumn Lake jumped out to a 13-8 lead in first half (thanks to TD passes to Ari Pliskin and Yoseph Orshan), Worthy stormed back with 2 quick TDs in the second half to take a 22-13 lead.

Autumn Lake scored with 10 minutes left to close the gap to 22-20 and after a goal line stand on defense, the Healthcare Pros executed a methodical 5-minute drive which included a critical 4th down conversion to Oren Bluman, and the aforementioned winning TD pass on 4th down.

Ahh, opening day. There’s nothing like it, am I right? The sounds! The smells! The vibrancy and pageantry of it all! If only every day could be opening day. But enough scene setting for now – on to the game!

And what a game it was. Iconic Builders, led by All-American QB Ab Reznick vs Doctor Auto, led by 2021 Comeback player of the year, Ari Hettleman. The game got off to a quick start as Doctor Auto forced a punt and then marched down the field to score a TD and take a 6-0 lead.

Ab was quick to respond with a gloriously thrown deep ball TD to Asher “Salt of the Earth” Meth, tying the game at 6 apiece.

Following a few key defensive stops, Dr. Auto took a 12-6 lead with a TD to undrafted rookie Sam “Ciabatta” Novograd. On the ensuing drive, Ari Hettleman (the rare dual-threat QB and defensive lineman) sacked Ab to push the Builders deep into their own territory. Hettleman then followed that up with another sack for the safety to give Doc Auto a 14-6 lead.

But Ab did what Ab does best – putting the team on his back, this time with his legs. Ab’s designed 70-yard QB sneak for a TD narrowed the gap to 14-12.

At halftime, Iconic took their first lead of the day (18-14), with an impressive TD grab by Aharon “The Howling Gastropod” Schnur. After a costly interception thrown by Hettleman, Iconic capitalized with another TD to go up 24-14. I’m not going to lie – it looked bleak for the transportation physicians.

It was ultimately grizzled veteran, Shimon Kanter, who gathered the troops with messages of inspiration. Dr Auto responded with a TD bringing the scoring within 4 (24-20). The only question that remained was – how will we get a stop in only 1 minute and 45 seconds? Well wouldn’t you know it – rookie Sam Novograd had the answer, picking off Reznick with an impressive display of athleticism and poise.

With 30 seconds remaining in the game, Hettleman leveraged the impressive O-line play of his Center, Levi Akkerman, to connect with Yeshaya Lerner on a check down pass. Lerner broke a tackle and took it in for the game-winning TOUCHDOWN!! What a Play!! What a Game!!

Tripping Kosher came into the game missing they’re top Center but that didn’t matter as the O-Line would give up zero sacks on the day. On the defensive side, the Trippers collected 4 of their own, thanks to the tenacious efforts of Barry Dollman and Avrumi Freund.

It was a full-team effort for TK with each receiver collecting 2 plus catches on the day, led by star WR, Mordy Reches, who scored 2 TDs. Freund, Dollman, and Aron Meister each had TD catches themselves while Chaim Pleeter played the role of “security blanket” in the middle of the field. New QB Shulie Hochman threw 5 TDs on the day, leading his team to victory.

Dougies overcame a slow start to dominate the second half and beat Allstate 26-6. Josh Zaslow caught two TDs and added an INT, Avraham Abba Freedman caught a long TD and passed for another to Eli Dollman, and Dan Gutman passed for 3 TDs. After an early deficit and a 6-6 halftime score, Dougies controlled the game on both sides of the ball, with Tzvi Haber destroying the Allstate offensive line with 5 sacks and multiple tipped passes.