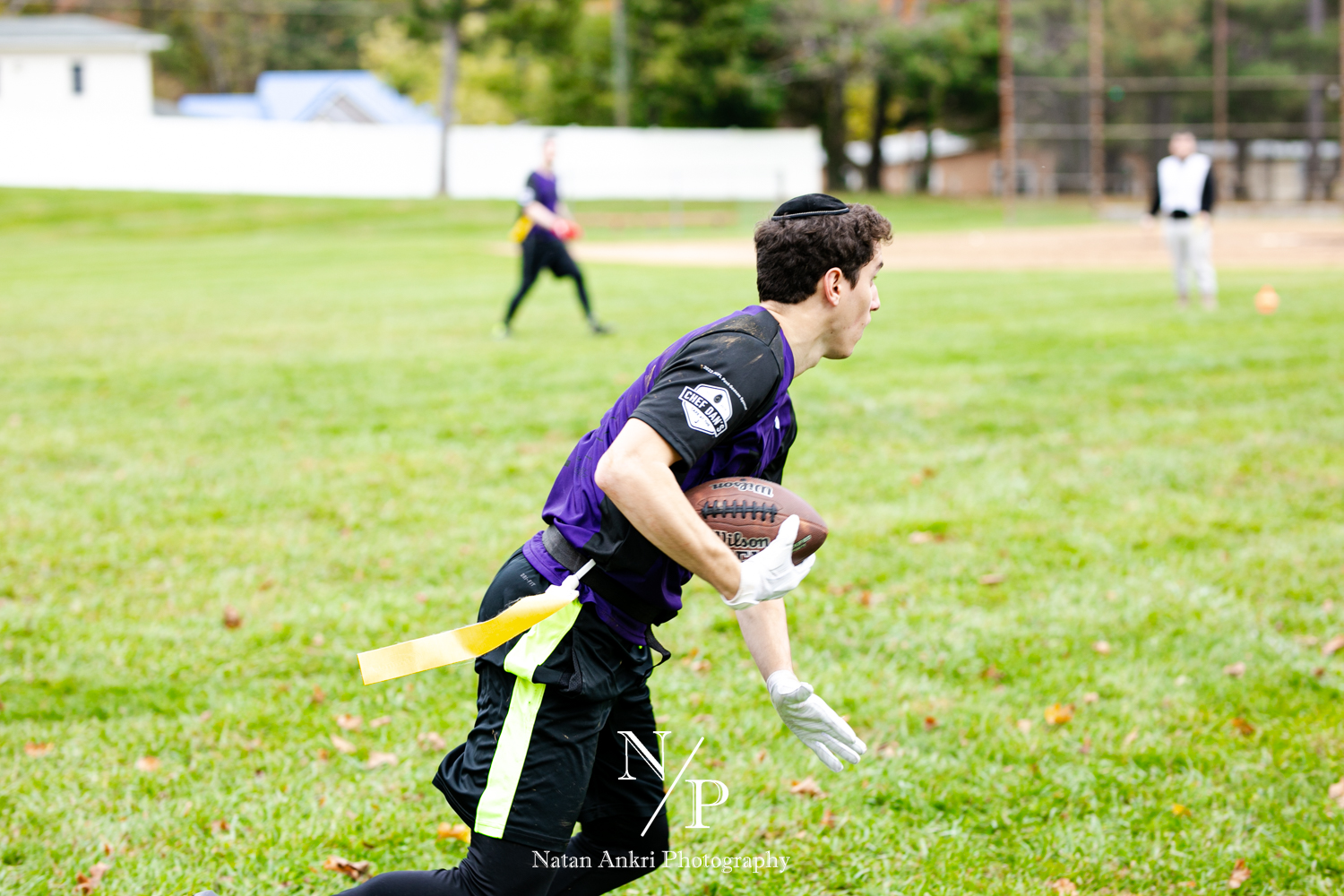 At the conclusion of a successful regular season, #1 seed Tripping Kosher made their way to the playoffs to take on the #4 seed Doctor Auto. Doctor Auto was the Cinderella story of the regular season, finishing with 3 wins in their last 4 games to claim the final postseason spot.

For Tripping Kosher, veteran WR and rookie QB Shulie Hochman was looking to make it to his 7th straight championship. Due to a non-league related injury, Hochman took on the role of sideline coach, handing the QB responsibilities over to defending championship winning QB, Moshe Tuchman.

On the opening drive, Dr Auto QB Ari Hettelman methodically drove his team down the field and into the red zone. But it was TK cornerback Chemi Lefkovitz who quickly created the momentum shift, picking off Hettleman on the one-yard line for the turnover.

All was not lost for the “car physicians” as on the next play, Dr Auto’s menacing defensive line of Mordi Spero and Levi Akkerman sacked Tuchman for a safety, putting them in front, 2-0. On the next drive, Hettelman connected with WR Sam Novograd for a beautiful TD catch over 2 defenders, giving Dr Auto an 8-0 lead.

But Tuchman’s years of league leadership experience allowed him to settle his team down and focus on the task at hand. Tuchman opened the offensive drive by connecting with multiple receivers, eventually hitting WR Mookie Chamdi for a TD. He then connected with Chemi Lefkowitz for the extra point to make it an 8-7 game.

With 2 minutes remaining in the first half, Tripping Kosher’s defensive line applied pressure to Hettelman, forcing an errant pass that was picked off by CB Baruch Glazer. On offense, Tuchman quickly connected with TE Avromi “Sigmund” Freund for two critical receptions and then, with only seconds remaining in the half, hit WR Chaim Pleeter in the back of the end zone for an impressive TD grab to put Tripping Kosher up 14-8 going into halftime.

The second half began with Tuchman moving the ball down the field once again, hitting All-Star WRs Mordy Reches and Mookie Chamdi for large gains. On third and goal, Tuchman found Chamdi again in the end zone and following an extra point, took a 21-8 lead.

On Doctor Auto’s next possession, Hettelman drove his team down the field for a quick TD, cutting the lead to 21-14. Following a few defensive stops by both teams and a combined 3 sacks from TK’s Freund and Baruch Dollman, Tuchman would ultimately break the scoring draught by hitting Pleeter in the back of the end zone on fourth and goal to take the lead 27-14.

But Dr Auto wasn’t through, as Hettleman drove his team down the field once again, capping off the drive with a 25-yard QB sneak for a TD to make it a one score game, 27-20.

On the final drive of the game, Doctor Auto got the ball with 2 minutes to go and drove downfield and into the red zone. But Tripping Kosher’s Defense came up big, stopping the Doctors on fourth and goal to close out the game and claim the win.

Following an uneventful first half, the Final Four matchup between Worthy Insurance and Dougies had one of the wildest endings in JCFL history, with Worthy claiming the victory 28-20.

The game started with a punt by Worthy then a great interception by CB Yoni Finkelstein, but the Worthy offense couldn’t turn it into points. After the teams traded a few punts, Dougies got on the board first with a 2 sub for 1 special: a short pass from (Sub) QB Meir Parry to (Sub) TE Howie Friedman. A defensive offsides on the extra point made it 7-0. But Worthy came right back and scored on a 20-yard strike from QB Chaim Finkelstein to WR Shloime Scheinfeld. On the final possession of the half, Scheinfeld had the 2nd interception for the Worthy defense.

In the 2nd half, things finally got interesting. Dougies opened with a long drive that ended at the 1-yard line, after a goal line stand by the strong Worthy defense. The Worthy offense got things going with a beautifully designed QB run that got them to midfield. After a TE rollout and a couple more QB runs, Finkelstein and Scheinfeld connected for their 2nd Touchdown. WR Moshe Guttman made a sliding grab for the 2-point conversion, giving Worthy a 14-6 lead. On the next possession, Dougies scored a long TD to tie the game at 14-14. After a Worthy punt, Dougies sustained another long drive, this time punching it in with a TD catch from WR Eli Dollman, taking a 20-14 lead with 8 minutes left in the game.

After the Worthy offense turned the ball over on downs, Dougies got the ball back at the 25-yard line and had the chance to put the game away. But with just under 4 minutes to go, Chaim Finkelstein intercepted Parry on the 10-yard line. The Worthy offense milked most of the clock and scored the game-tying Touchdown, an incredible throw and catch by Finkelstein and Guttman, with 1:21 left to go. Worthy’s defense then went to work again. A sack on first down backed Dougies up to their own 4-yard line, then Chaim Finkelstein made another incredible diving interception. On offense, Finkelstein threw the game-winning Touchdown to TE Eliav Sobol with 39 seconds left. Dougies had one final shot to tie the game but Yoni Finkelstein sealed the victory with a leaping interception on the sideline, his second of the day, to close out the game.