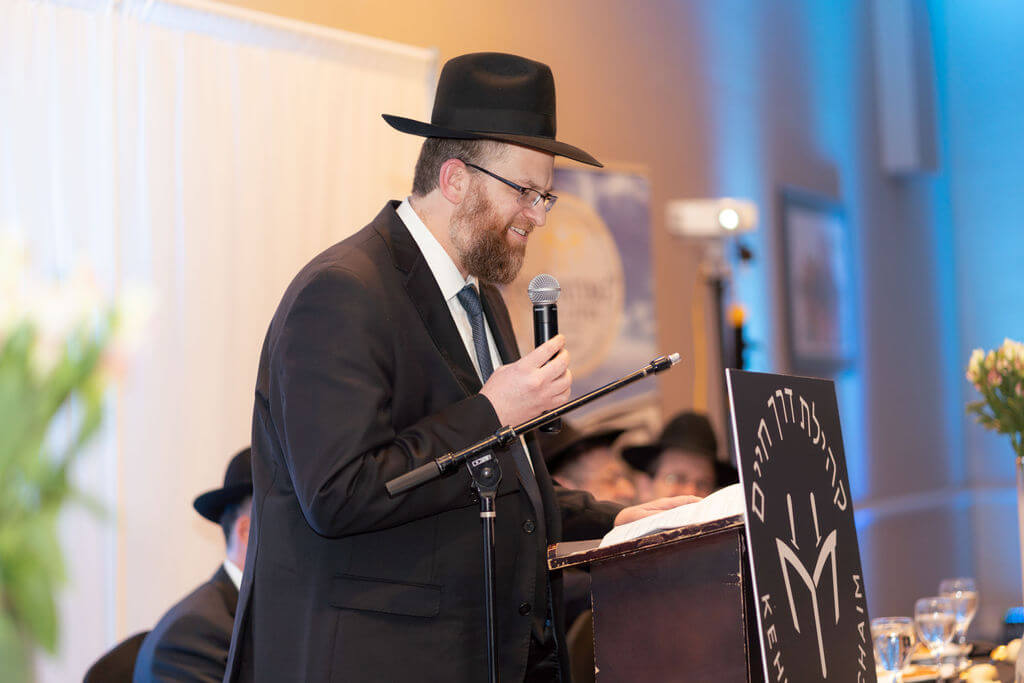 His sentiment was echoed by nearly 250 attendees at the special event named Seudas Orah V’Simcha. The seudah celebrated incredible accomplishments in limud hatorah at Kehillas Derech Chaim of Baltimore, led by Rabbi Pinchas Gross. The event featured a Siyum on Seder Moed and highlighted the release of Kuntres Orah V’simcha.

The Kuntres is a 240-page compilation of in-depth Ha’aros (essays) on Meseches Megillah, written by 50 members of the Kehilla. It also includes the Rav’s Parpera’os HaDaf, insights on the Daf Yomi released daily via WhatsApp Chat. This popular chat, designed to keep lomdei hadaf engaged and challenged, boasts over 250 subscribers worldwide, along with many “All Daf” listeners.

In an unsolicited letter, the Kuntres Editor, a Kollel yungerman from Yerushalayim, shared, “I was honored to have the zechus to edit such a rich Kuntres of חידושי תורה. I was truly moved to behold dedicated yungerleit, who are certainly very busy [with their] lives and are presumably baring the ol of parnassah, that still have heads buried in עומקה של תורה, both הלכה and אגדה. It is a clear indication of what is truly valuable to your special Kehilla and it is very inspiring.”

Nearly 100 women also attended the event on a busy Thursday night, demonstrating their chashivus haTorah. The Rav emphasized that the women’s mesiras nefesh for their husbands’ learning is a major credit toward this accomplishment.

At the event, the Rav explained the source of the Kuntres’ and the events’ shared name is based on the pasuk of ”ליהודים היתה אורה ושמחה”. The gemara points out ”אורה זו תורה” as the pasuk says, “כי נר מצוה ותורה אור דרך חיים…”. Orah V’simcha is a play on the connection to shul’s name through this pasuk and on its mission of Torah as a vehicle of simcha in the lives of its congregants.

This event further displayed the shul’s remarkable growth and its establishment as an integral part of the landscape of the Baltimore Jewish Community. The shul has over 180 member families and is beginning to build its own building after gaining zoning approval last October. In the interim, the Shul operates out of Ner Tamid on Shabbos and hosts davening and learning during the week in the Bais Medrash on Greenspring Avenue.

Several rabbinic community leaders attended the event, including Rabbi Yaakov Hopfer, Reb Tzvi Berkowitz and Reb Shragi Neuberger. Rabbi Hopfer expressed with sincere emotion and joy how incredible it is to see a kehilla that has truly grown from a “seed” to a “garden” in Torah, Avodah and Yiras Shamayim. He noted that if all this was accomplished without a permanent structure, one can only imagine the potential of this Kehilla when it eventually settles into its own home, b’ezras H-shem.