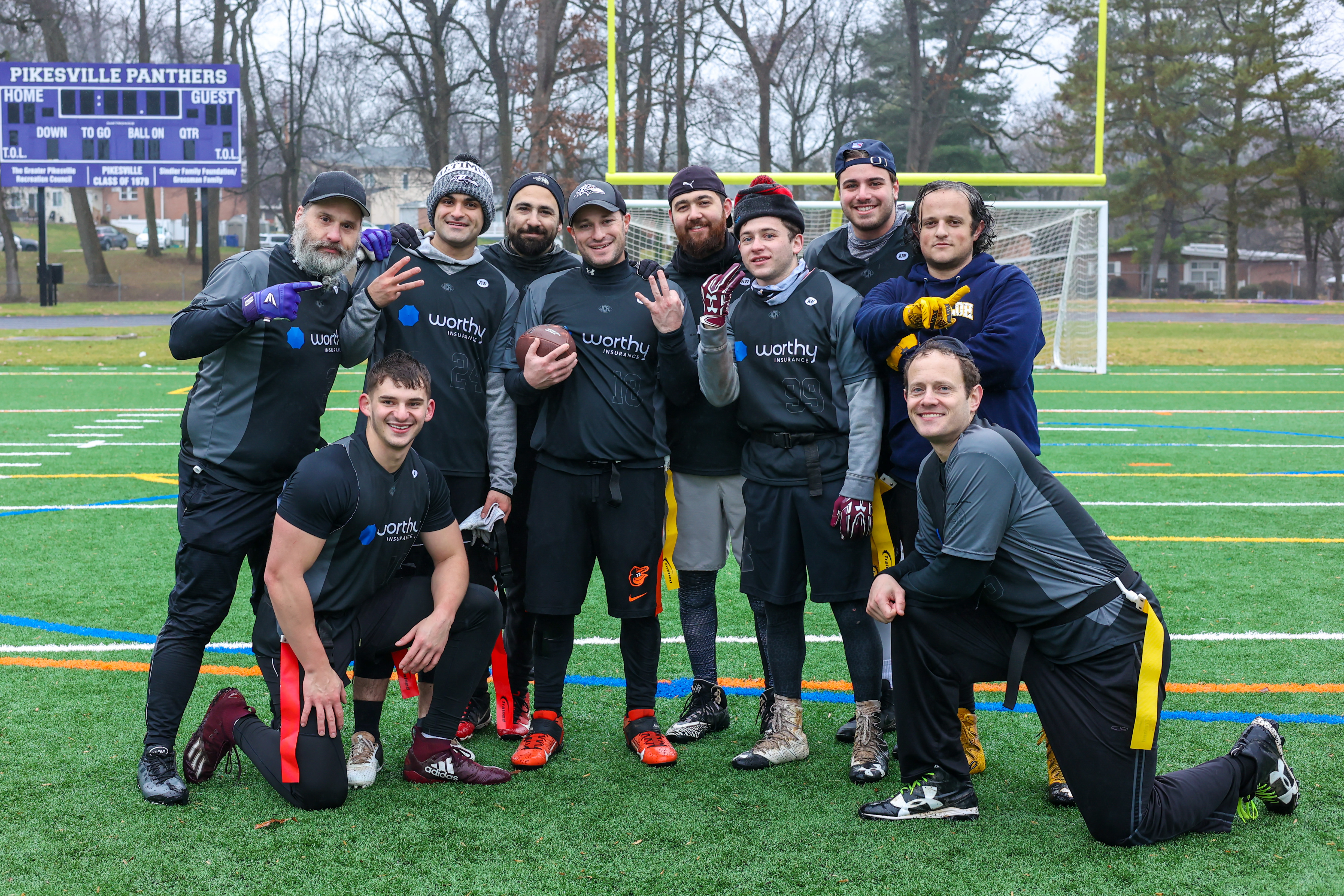 Any casual follower of the Jewish Community Football League by “Shimz Cars” could’ve predicted before the season that Worthy Insurance and Tripping Kosher would meet in the JCFL Championship Game presented by “Chef Dan’s Cafe.” In the last 9 seasons, it was a guarantee you would see either Captain Chaim Finkelstein (Worthy) or Captain Shulie Hochman (Tripping Kosher) or both, competing in the Championship Game. Hochman is an All-Pro WR/DB but stepped up this season as a first-time Captain & QB, while Finkelstein has been a Captain & QB/LB since the league’s inception. (Note: anyone wanting to play QB next season should reach out to Dovi Ziffer (davidziffer@gmail.com)

Unfortunately, Hochman was placed on IR (hamstring) after the regular season matchup between Tripping Kosher and Worthy, but the team maintained their momentum when he was replaced by last season’s Championship-winning QB, Moshe Tuchman. TK’s only loss of the season was to Worthy back in week 4, and they came into the Championship Game riding a 4-game winning streak, determined to beat Worthy this time. But Worthy, coming off an incredible comeback performance in the Final Four, knew they matched up well against TK, and would win the Championship if they stuck to their gameplan.

Championship Sunday was cold and raining. The ball was wet, the field was slippery, but the players were fired up to play on the “ActualEyes” turf field in front of fans and family members. Worthy won the coin toss and deferred to the 2nd half. On TK’s first possession, they were stopped on 4th down when Worthy CB, Pasey Wealcatch, swatted down a pass near the goal line. Worthy’s high-powered offense wasted no time scoring. A 40 yard TD pass from Chaim Finkelstein to brother Yoni Finkelstein was called back after a holding penalty, but 3 plays later, the two connected on their patented back-shoulder throw for the first Touchdown of the game. The 2 point conversion was shockingly returned by TK for 2 points, and the score was 6-2. After another 4th down stop by Worthy, this time courtesy of Shloime Scheinfeld, the Finkelstein brothers connected again on a long completion, a 35 yard acrobatic catch by Yoni on a tipped ball, setting up a 10 yard Touchdown strike to Scheinfeld in the front of the endzone. The brothers connected on another back-shoulder for the 2 point conversion, increasing the lead to 14-2.

Just before halftime, TK cut the lead to 14-9 on a 15 yard TD to WR Mordi Reches and an extra point to WR Mookie Chamdi, and after forcing Worthy to punt, they had a chance to take the lead. But Worthy Safety Ouriel “Brad” Nafisi, looking to win his 3rd consecutive Championship, shifted all the momentum back to Worthy with the biggest interception of the season, perfectly jumping a route in the back of the endzone. After that, Worthy dominated the rest of the game.

Because WR Yoni Finkelstein torched them in the first half, TK was focused on stopping him in the 2nd half. Unfortunately for TK, that led to the other Worthy receivers running open the rest of the game. Worthy scored a Touchdown on the opening possession of the second half, a 1 yard rollout to TE Eliav Sobol, set up by a QB run and a long Scheinfeld completion. Scheinfeld caught another strike just past the goaline for the 2 point conversion, increasing the lead to 22-9. After the teams traded punts, Worthy scored again and took a 28-9 lead after Scheinfeld caught his 2nd Touchdown of the day, on the same unstoppable redzone play they ran all season, essentially putting the game out of reach with 15 minutes left.

After a few more punts, TK scored just before the 2-minute warning, extending the game and cutting the lead to 28-16. But on the first play of the next possession, Finkelstein motioned Scheinfeld from right to left, pitched him the ball, and he raced 50 yards for his 3rd Touchdown of the game. That play made the score 34-16 and it in essence, ended the game. Congratulations to Yoni Finkelstein on being named Super Bowl MVP; to Shloime Scheinfeld, Offensive Player of the Year; to Brad Nafisi, Defensive Player of the Year; and to Chaim Finkelstein, this season’s Walter Johnson Jr. Most Valuable Player. Thank you to all of our players, supporters, and sponsors. Looking forward to next season!