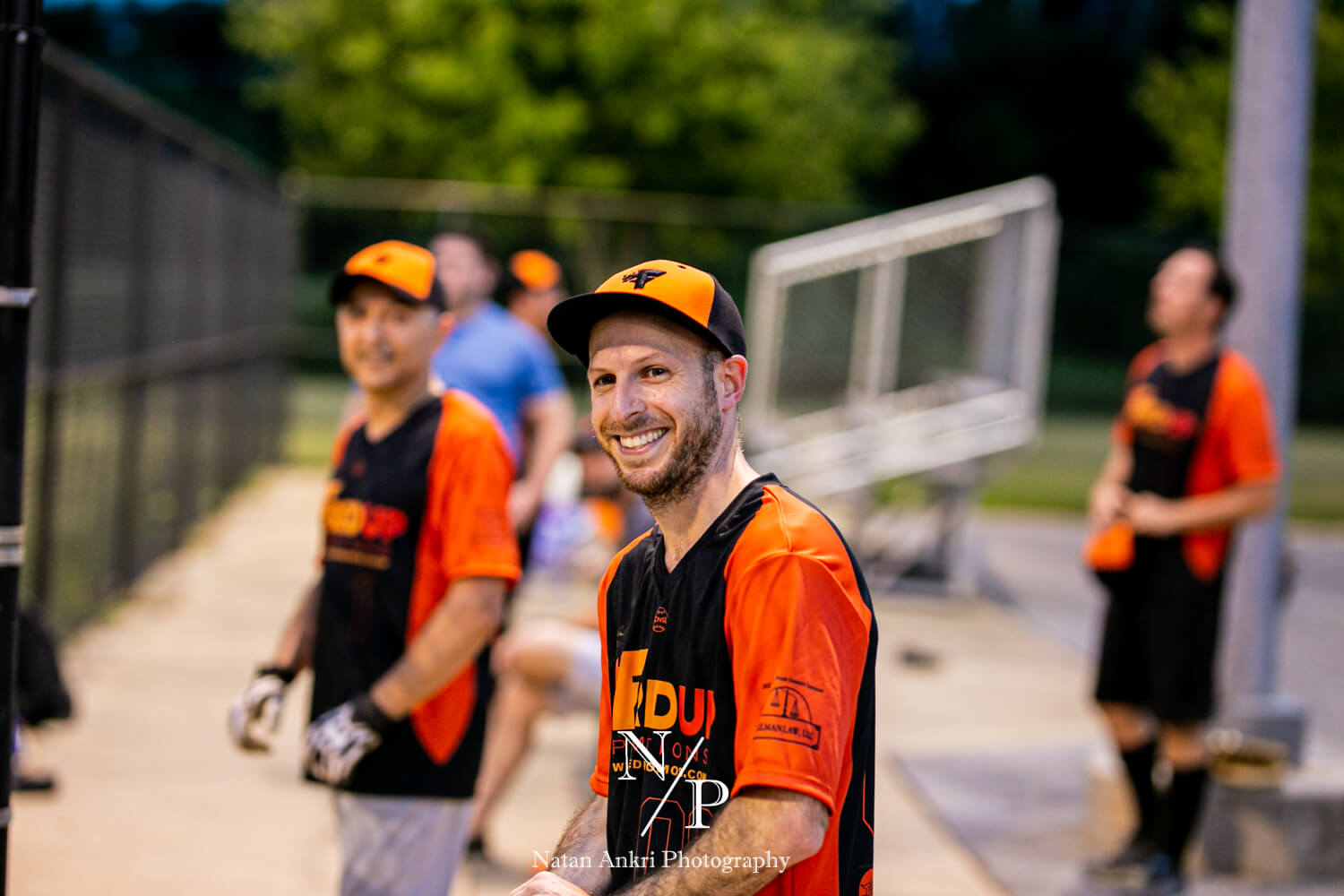 The Jewish Community Night Softball League (sponsored by Tripping Kosher) began their third season on Sunday evening (August 14th) at the beautiful Reisterstown Regional Fields – by Web Interactive Technologies. As expected, the fields were impeccably groomed, thanks to the support of the 2022 grounds crew sponsor, Blue Mountain Delivery.

Following the draft, teams were provided with their team jerseys, sponsored by Sushi Sakura (specially designed for the first time to include player names.) All eight teams will compete for seven regular season games, with the top four teams facing off in a round of playoffs. The playoffs winners will then battle each other in the Mailman Law, LLC championship.

Read on for some of the highlights from the first week of the season:

In a roller coaster of a game, Fired Up Promotions snatched the lead in the final inning (the 7th), despite entering the inning down 9-6.

Fired Up 3B Binyomin Goldenberg singled to start the 7th. A hit by Yoni Strauss and then an RBI single by Mark Stutman scored Goldenberg. Shimmy Messing continued the hitting parade, singling to score Strauss and Yoni Addi followed with another single plating another run. All-Star Jeremy Kramer then brought everyone home, clearing the bases with a 2-run bomb to RF, giving Fired Up a lead they would not relinquish.

In the bottom of the 7th, with the game on the line, Diamond Medical had the tying run at 3rd but an incredible throw from 1B Shimmy Messing to Catcher Navid Raoofian closed out the game.

The Catcher position proved to be critical in this game as David “I’m Fired Up” Addi caught one at home in the first inning from LF Kramer that saved a run as well.

Park Heights Roofing came out slugging in the first inning, scoring 5 runs, thanks to 4-hit performances from rookies’ Moshe Shmuel Leder and Eli Englander. PHR was in complete command until a 6-run 5th by Shimz Cars tied it up.

In the 6th, rookie sensation Shaya Swiatycki slugged a bases clearing triple that sealed the win.  Of note was the solid play from PHR veterans, Shlomo Rosenstein and Avi Safren, who each had key hits.

PHR was quick out of the gate in their second game of the evening, opening with a 6 run first. Avi Safren remained clutch with a 4 RBI performance, Binyamin Guttman came through in key spots, as did Brian Ponczak, and Moshe Tuchman.

Eli Englander again had a multi-hit performance and Scott Leder struck out 5. Jewish Day Camp attempted a late rally in the 5th but came up short, thanks to strong defense by PHR’s rookie brothers, Moshe Shmuel and Koby Leder, who provided multiple acrobatic catches.

Excited to finally be back for the 2022 JCNSL season, KD took the field against Jewish Day Camp. The “campers” jumped to an early 7-0 lead in the first few innings.

In the bottom of the 3rd, KD shook off the rust and scored 2 with some clutch hitting by Yaki Strauss. JDC responded, putting up 6 more runs to bring the lead to 13-2. But Baruch Glazer (KD’s pitcher) then settled down and summarily shut down the JDC bats.

In the 6th, things turned around for KD. Moe Krohn smashed a line drive to get the party started. Yaakov Spatz followed with a line drive down the 3B line that turned into a double. Hits by Moshe Miller and Mayer Goldsmith continued the onslaught. The rest of the team caught the fever and the hits continued. Following a few more singles, KD had pulled within 5. Avrumi Freund then drilled a 2-run HR to RF, bringing the score to 13-11.

KD turned a 1-2-3 inning in the top of the 7th, thanks to gold glove left fielder Akiva Katz’s defensive play and came back up to bat, down by 2. A couple hits and a few doubles later, KD had 2 runs in, a runner on 2nd, and Freund back at the plate. On a 2-2 pitch, he hit a ball that carried out to center field and scored Yaki Strauss from 2nd base for the walkoff win.

On the evening, KD’s Menashe Minkin led his team with impressive defense and strong motivational speaking, encouraging his team when they needed it most.

KD opened the game by retiring the side 1-2-3, and came up to bat in the bottom of the first. A leadoff single from Eliezer Katz, and hits from Baruch Glazer, Menashe Minkin, and Yaki Strauss, and KD was up 3-0 going to the 2nd.

In the 3rd, a double from Mayer Goldsmith and a hit from Moshe Miller brought the lead to 4-0. Diamond Medical got 1 run in the 3rd to make it a little closer but Glazer pitched out of a jam to keep the score as is.

From that point on, it was all KD all the time. In the 4th, Yaakov Spatz crushed a 2-2 pitch over the left-center fielder’s head for a bases clearing triple. In the 5th, the highlight was a running leaping catch by LF Akiva Katz for the 3rd out. And when the dust settled, KD’s record had improved to 2-0 on the season.