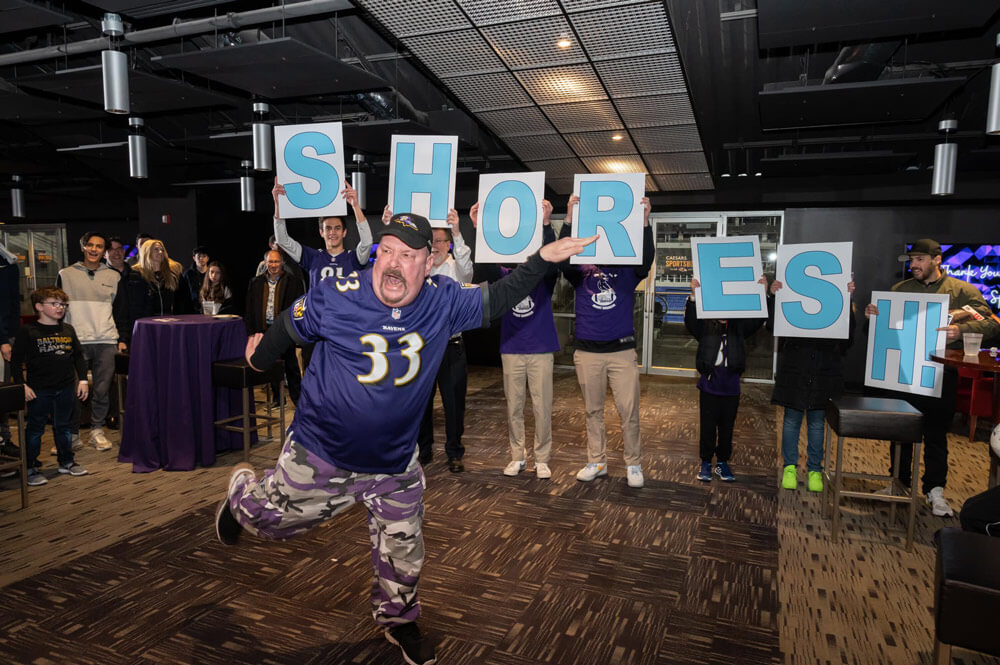 Shoresh’s VIP Night at the Ravens’ M&T Bank Stadium was a massive success and a beautiful night for the more than 300 donors, guests, and volunteers present. The event included three entertainers, headlined by famed mentalist Alan Nu. Everyone loved meeting and getting autographs from incredible sports players such as Orioles Hall of Famer Mike Bordick and two star Ravens players, Chuck Clark and Daelin Hayes. Bordick noted that it was an honor to celebrate Shoresh and be part of “such a wonderful event” in support of an organization that “so many have been positively impacted by.” Guests also enjoyed the open bar, and delicious dinner buffet catered by Le Mo.

For the first time in Shoresh history, the program video, produced by outgoing Director of Operations Phran Edelman and Jeffrey Reches of Reches Creations Video Inc., was broadcast on the stadium’s two end zone RavensVision video screens. Both before and afterwards, major donors’ logos were displayed on them as well as on screens throughout the club level. Super sponsors were even able to go on an awesome tour of the stadium. “Real Fan Dan” Granofsky, who regularly leads cheers for 70,000 fans at Ravens games, led everybody in Ravens cheers and surprised everyone with some Shoresh cheers as well! A major highlight of the night was the killer auction, one of the best ever, highlighted by trips to Utah and Disney World, VIP sports tickets, restaurant gift cards, and a $500 cash prize!

Shoresh star camper Amari Suissa from Potomac was excited to come to the event and catch up with people she hadn’t seen in months. “I was instantly greeted by Rabbi Dave. Next Rabbi Stein came up to us and then Rabbi T, who introduced us to a magician who bent a fork with magic (which was really cool and he turned it into a bracelet for my sister). I got both Mr. Bordick’s and Daelin Hayes’ signatures and then Dan ripped his shirt off with a Shoresh shirt underneath which was really funny and entertaining. The video was also super well put together and it was really exciting to see the club level area.”

Shoresh’s event photographers and videographers Marc Summerfield, David Hercenberg, and Sharon Nicholas did an amazing job capturing the epic moments throughout the night. However, one of the most heartwarming moments of the entire night actually occurred after the event.

“imadi,” an organization that helps children and families dealing with illness and disabilities, sent a few volunteers to the event to escort a boy with cancer who had just lost his grandfather. He had a blast and at the end of the night, he was able to meet Daelin Hayes, one of the Ravens players in attendance. After the event, one of the volunteers reached out to Hayes, explaining this boy’s situation and thanking Hayes for speaking with him and making his night so special. The volunteer did not expect a response, but the next day Hayes wrote back that he would like to hand-deliver a jersey signed by the Ravens’ entire starting defensive line to this little boy. Hayes made the trip to the boy’s home to give the jersey to him personally, and even stayed for 45 minutes to play some touch football, which meant so much to the boy and his family.

This is just one story reflecting the special impact of that incredible night, with more to come during Shoresh’s programming throughout the year.