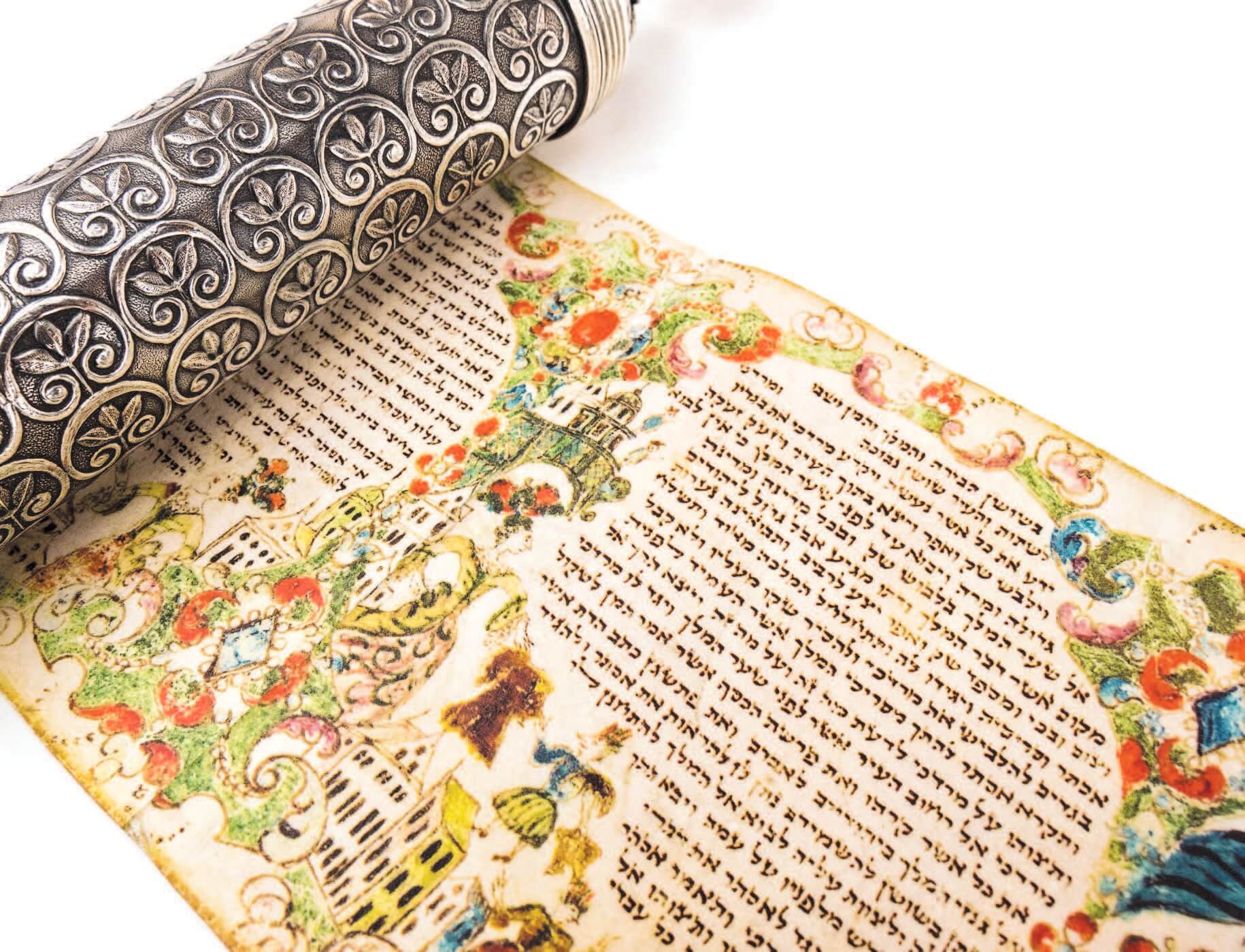 HaRav Chaim Kanievsky, shlita, typically answers questions in a short, concise fashion. HaRav Zev Aryeh Steiglitz, shlita, had the opportunity to ask him many questions about Megillas Esther. Below is an adaptation in English of a selection of the questions and answers HaRav Steiglitz recorded. Please attribute any errors to the English adaptation.

A. No. They say regarding Achashveirosh, “May his memory be blotted out.”

Q. The Medrshas states that “they did not allow” Achashveirosh to sit on Shlomo’s throne. Who didn’t allow him? Wasn’t he the king?

The throne became animated and prevented him.

Q. The Gemara (Megilla 12a) states that Achashveirosh wore the bigdei kehuna. Rashi comments that he wore the garments of the Kohen Gadol. How did he know this?

A. The garments of a regular kohen aren’t exceptional. Presumably, Achashveirosh wanted to honor himself with the choicest clothing of the kohanim.

A. The punishment he received was for this as well.

Q. Why doesn’t the Megillah mention that there were musical instruments at the party?

A. The Megillah did not give an exhaustive list of all the details of the party. Presumably, there was music at the party.

Q. The Gemara (ibid.) states that Mordechai worked at Achashveirosh’s party. Wasn’t this misleading? Wouldn’t other Jews attend because they saw him attending?

A. No. He already warned them not to attend.

Q. Rav Chaim explained elsewhere that Mordechai attended the party to watch the wine that Jews drank. However, the prohibition of Stam Yayin wasn’t instituted until much later in history.

A. Meticulous Jews kept the law anyway even before it was officially enacted.

Q. Why is Vashti sometimes referred to in the Megillah as “Queen Vashti” and other times as “Vashti the Queen”?

Q. Can one use the horn that grew on Vashti’s head to fulfill the mitzvah of Tekias Shofar?

A. The Gemara does not say that she grew a horn, only a tail. In any event, it would be invalid for the

mitzvah since it is not from a kosher animal. (There are some sources that suggest that she did grow a horn.)

Q. Why isn’t the death of Vashti mentioned in the Megillah?

A. The Megillah states that the king followed the advice of his advisers and that is tantamount to saying that she was killed.

A. He was punished by losing his wife. (Obviously, Vashti deserved to die as well. Her death simultaneously punished both of them.)

Q. Why is it relevant to the miracle of Purim that Esther was an orphan and raised by Mordechai?

A. That was the reason she listened to Mordechai’s instructions.

A. She was afraid she would lose track while in the palace.

Q. Chazal tell us that to each onlooker Esther appeared to be from their nation. Yet, the Yalkut suggests that Haman suspected that Esther was Jewish. Why would he suspect that if she looked like someone from his nation?

Q. Why does the Gemara seek out a hint for Haman in the Torah? Don’t we say that the name of the wicked should rot?

A. Even still, there is nothing that is not hinted to in the Torah.

Q. Why does the Megillah state that Mordechai “will not bow” to Haman in the future tense? It should have said “he did not bow” in the past tense.

A. Mordechai did not bow and told everyone that he never will.

Q. The Malbim states that Haman purposely did not mention specifically the name of the nation he wished to destroy because he was afraid that Achashveirosh would not agree. Didn’t Achashveirosh hate the Jews more than Haman?

A. Yes, but he was afraid to start up with them.

Q. Haman told Achashveirosh that the Jews regard him as worse than a fly. If a fly lands in a cup of wine, they just discard the fly. But if Achashveirosh would touch the wine, they would spill the whole cup out. However, the prohibition of Stam Yayin wasn’t enacted yet (until the times of Beis Shammai and Beis Hillel).

A. (Same as the answer above.) Even still, many Jews kept the halacha even before it was officially enacted.

A. He picked an example of a holiday.

Q. The Megillah says that Mordechai tore his “begadim.” By Yaakov Avinu, the Torah states that he tore “simlosav.” Why the discrepancy?

A. The pasuk says, “Lo silbash gever simlas isha,” and Yaakov lived before Matan Torah. (Rav Chaim has a sense of humor!)

Q. Why didn’t Mordechai change out of his sackcloth so that he could come to the palace and talk directly with Esther without using an intermediary?

A. He didn’t want to stop his prayers for the salvation of Klal Yisrael.

Q. Chazal tell us that even a curse of tzaddik that is made conditionally still has some effect. Mordechai told Esther that if she doesn’t approach Achashveirosh, then she and her family will be destroyed, and salvation will arise from a different source. We don’t see this curse having any effect at all.

A. It did. The Gemara says that she was no longer allowed to live with Mordechai as husband and wife.

Q. Did Esther ask that the women should fast too?

A. Mordechai had students to help him.

A. The Gemara’s statement was intended to include both mitzvos.

Q. The Gemara in Megilla says (15b) that as Esther was about to face Achashveirosh, she felt that the Shechina departed from her. Esther said, “Perhaps it is because I called Achashveirosh a dog.” Does Hashem care about the honor of a wicked king like Achashveirosh?

A. Yes. You are supposed to pray for peace for the local kingdom.

A. It is less of a miracle to extend the scepter.

Q. How did Esther prepare the feast for Achashveirosh and Haman on yom tov? One is not allowed to cook on Yom Tov for someone who doesn’t keep yom tov.

A. There was a danger to human life, so all prohibitions are waived.

Q. How did Esther prepare bread for the feast on Pesach? It’s chametz!

A. There was a danger to human life, so all prohibitions are waived

A. That would be a most public display.

Q. Why didn’t Haman kill himself rather than publicly degrade himself by parading Mordechai through the streets?

A. Haman thought he would get the last laugh by killing Mordechai.

Q. How was Mordechai allowed to take a haircut on the second day of Pesach? It’s yom tov.

A. He took a haircut with a non-Jewish barber, and it was permitted because of the honor of the king.

A. Yes. He checked them before wearing them.

A. Rav Chaim: She was too far up to hear his voice.

B. (Other answers: 1. He was hoarse from yelling so much throughout the parade route. 2. There were many other people shouting with Haman at the same time so she couldn’t hear her father’s voice. 3. Haman was imitating Mordechai’s voice. 4. She heard what she wanted to hear. 5. Haman’s voice changed out of anguish.)

A. The pasuk is discussing the perspective of the people in Haman’s house. They knew he would

be in a state of mourning. When they saw him, they noticed his head was covered in refuse as well.

Q. The Megillah refers to the same people in the same pasuk (6:13) in different ways. First the pasuk calls these people Haman’s friends and then Haman’s counsel.

A. When they saw the start of his downfall, they didn’t want to be friends anymore.

A. Charvona knew that Achashveirosh believed that he would have been saved regardless.

Q. The Medrash Shocher Tov states that a third of Haman’s estate was eventually used to build the Second Beis Hamikdoah. How could money that was used for idolatry be used for such a holy purpose?

A. Haman didn’t use the money on Avodah Zara, only on himself.

Q. According to the Mechilta in Parshas Beshalach, all the money of Amalek must be destroyed. How were Mordechai and Esther allowed to benefit from Haman’s estate? He was from Amalek.

A. Since Haman was executed, his estate became the property of the king. It was no longer considered Amalek’s wealth at that point.

Q. According to the Targum Sheni, Mordechai wore his tefillin over his new crown. How was that permitted? Isn’t the crown a chatzitza between his head and the tefillin?

A. Mitzvasa b’kach. (It is unclear to me what Rav Chaim meant by that.)

Q. Why did Esther ask that Haman’s ten sons be hung post-mortem?

A. She wanted the populace to fear the Jews and see what happens to their enemies.

Q. How did Mordechai decide which of Haman’s many sons to hang?

He picked the most important ones.

Q. The Gemara states that the verse that states that all the nations saw “Our G-d’s salvation” refers to the miracle of Purim. Rashi explains that the entire world knew about the miracle from the letters which were sent out. Didn’t the entire world also know about the Splitting of the Sea? Chazal tell us that all the waters in the world split at that time.

A. The population increased since the miracle of Kriyas Yam Suf. (Therefore, the Purim miracle was known to more nations, so it was reasonable to Chazal to explain the verse as referring to the Purim miracle.)

Q. Mordechai stayed involved in royal affairs even after the Purim miracle and therefore was forced to devote less time to learning Torah. (Rashi on the Megilla 10:3) Why did the great Tzaddik Mordechai do this?

A. He thought that it was a matter of pikuach nefesh. (He would be in a position to forestall any future negative decrees. However, not all the sages of his time agreed with his decision.)