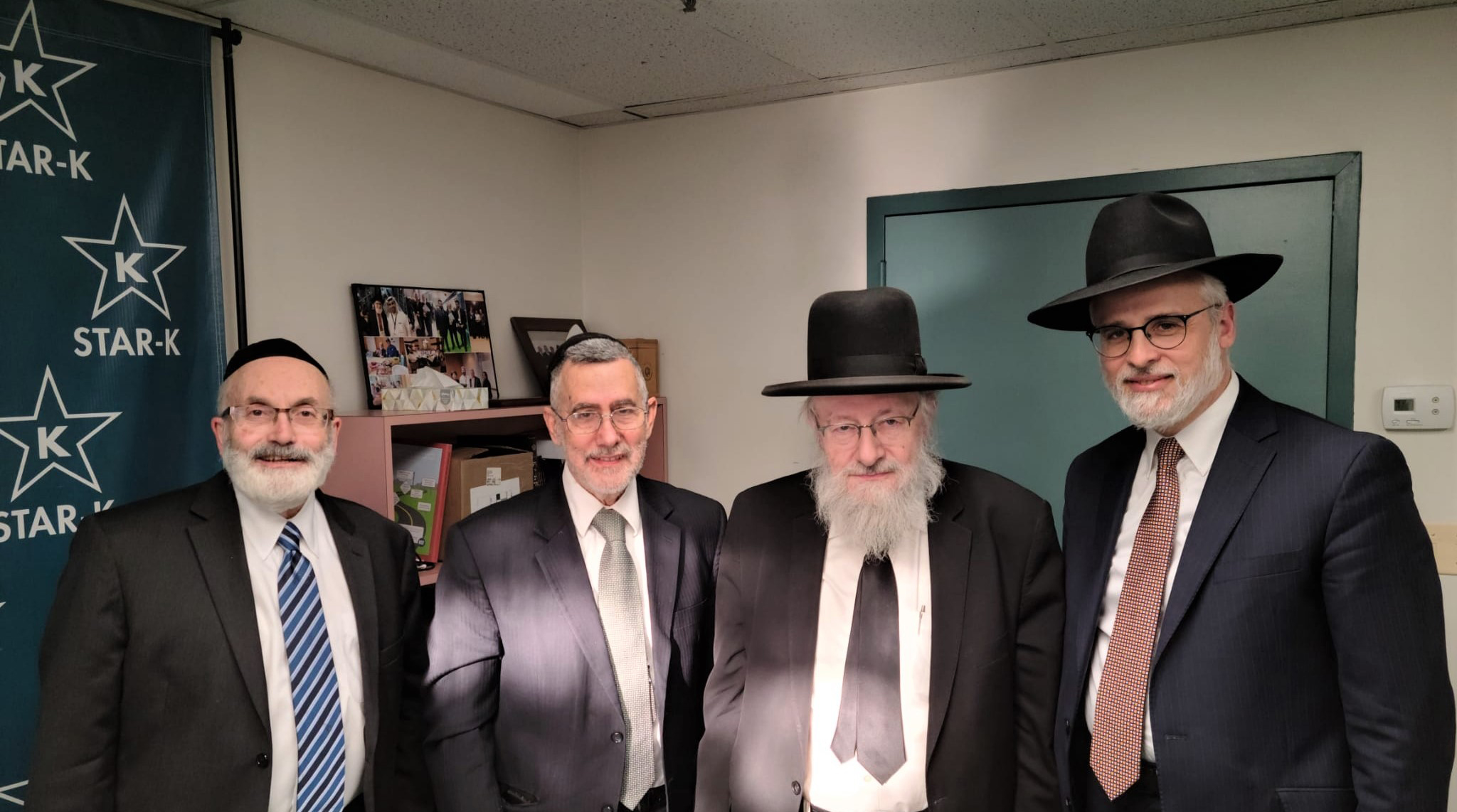 In November, at the annual Kosherfest trade show, the President of STAR-K Kosher Certification, Dr. Avrom Pollak, met with Rabbi Menachem Genack, CEO of OU Kosher. During the conversation, Dr. Pollak extended to Rabbi Genack an invitation to visit STAR-K headquarters and deliver a shiur for the staff of Kashrus Administrators. Rabbi Genack accepted the offer and on Thursday, December 16, 2021, he arrived in Baltimore and was warmly welcomed by STAR-K leadership and staff.

STAR-K and OU work closely together. They share a Universal Kosher Database – together with other kashrus agencies – to maintain kashrus standards, and both have executive membership status in the Association of Kashrus Organizations (AKO). Additionally, they operate jointly in hundreds of plants all over the world. A fact perhaps less known, mentioned by Rabbi Genack, is that both OU and STAR-K employ numerous talmidim of STAR-K Rabbinic Administrator Rabbi Moshe Heinemann. Many of OU’s Rabbinic Coordinators studied in yeshiva in Baltimore and learned from Rabbi Heinemann.

The topic of Rabbi Genack’s shiur was “The Kashrus of Gelatin”, which he noted is a subject that he and Rabbi Heinemann have discussed many times over the years. STAR-K Kashrus Administrator Rabbi Moshe Schuchman synopsized, “The shiur focused on Rabbi Aharon Kotler’s highly influential responsa on gelatin, written in 1962, which transformed prevalent halachic practice from considering gelatin as kosher – even when derived from non-kosher animals – to the universally accepted view that it is prohibited unless produced from properly shechted animals. Rabbi Genack developed an analysis of the material based on principles from the teachings of Rabbi Chaim Soloveitchik and his son, Rabbi Yitzchok Zev, the Brisker Rov, interwoven with insights of Reb Chaim’s grandson, Rabbi Yosef Dov Soloveitchik of Boston.  Interspersed with fascinating stories, the shiur featured lively interaction with Rabbi Heinemann and other STAR-K rabbonim, in the style of bais medrash learning.”

Rabbi Genack concluded with positive words about the relationship between the two organizations and praise for STAR-K staff as B’nei Torah. He expressed his wish for STAR-K to reciprocate with a shiur in the OU office.

STAR-K Kashrus Administrator and Director of Special Projects, Rabbi Zvi Holland, added, ““Rabbi Genack’s outstanding choice to focus on Rabbi Kotler’s responsa represented the close friendship his own rebbi, Rabbi Yosef Dov Soloveitchik, had with Rav Heinemann’s rebbi, Rabbi Aharon Kotler. This was a wonderful opportunity to host Rabbi Genack, who expressed his amazement at the growth of the Baltimore community and of STAR-K since his last visit about 30 years ago.”