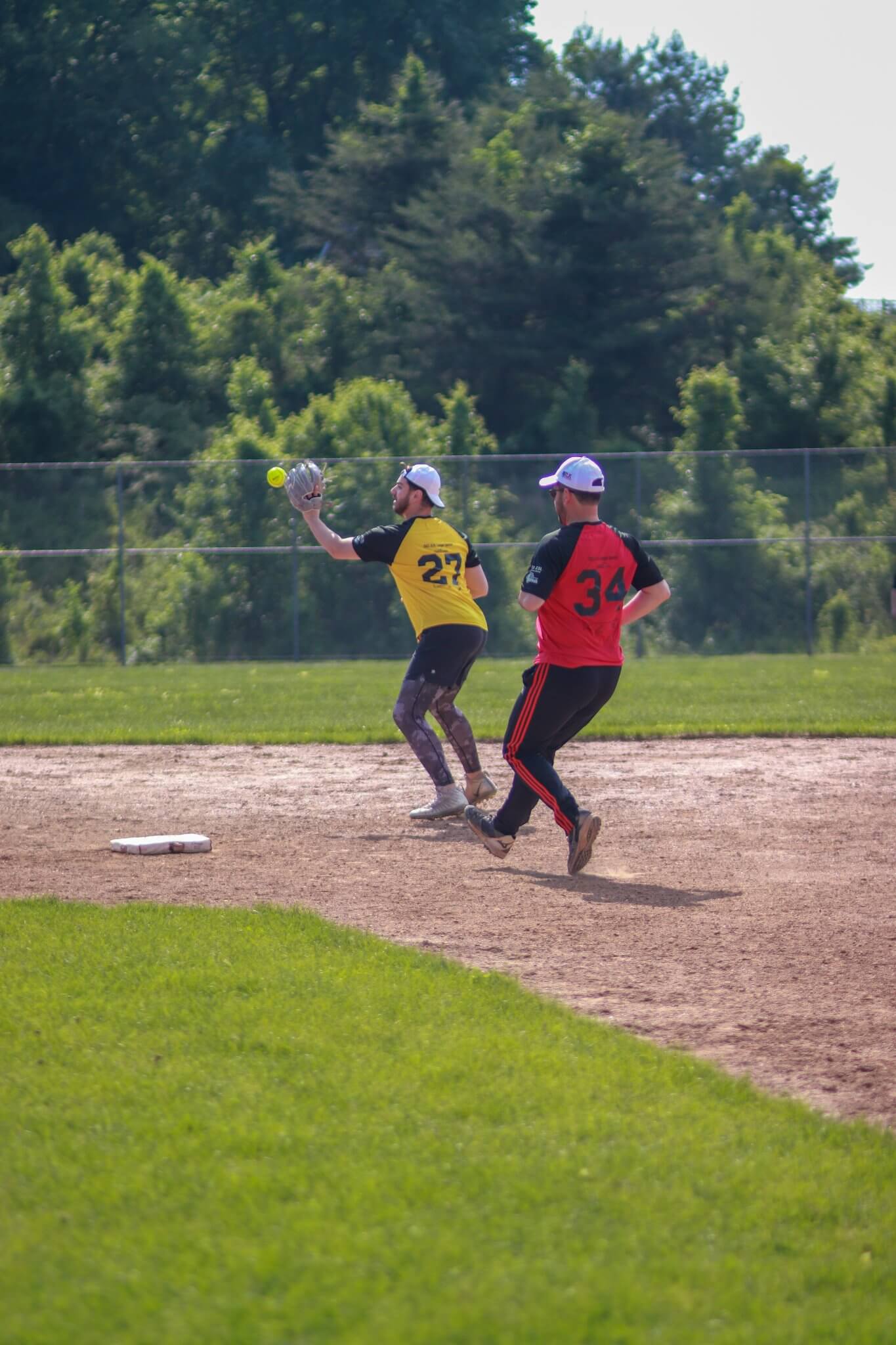 With four games completed, the 2022 season of JCSL by Shimz Cars is running smoothly. And with the parity in team strength this season, the Camp Shoresh Title is still up for grabs.

Players continue to show up each week to the well-manicured Fired Up Promotions fields, wearing their snazzy Web Interactive Technologies jerseys. And thanks to the efforts of the “NW Regional Grounds Crew Team” of Ghee and Baba, the fields are fully lined and set with the appropriate Premier Financial equipment each Sunday morning

With a double-header played in week 3, many players were initially unsure of what changes to expect. But after consulting the Dr Stanley Markovitz Orthodontics LeagueRules and Regulations, all players minds were put at ease.

Continue below for some of the excitement from games 2, 3 and 4 of the season:

Following a thrilling come back and walk-off win in week 1, Stutman Chiropractic decided to ramp things up in week 2. After giving up an early first inning run, the Chiropractors came back with 4 runs of their own, thanks to a couple of singles and a 3-run, opposite field HR by Shulie Hochman. Stutman Chiropractic played strong defense behind P Doc Stutman while turning things up on offense. Each player collected at least one hit with 9 getting 2 or more. Levi Ackerman and Yitzchok Sheen each hit bombs to the warning track while Dovid Pensak contributed with an opposite field home run.

After sitting out the first week of the season with a first game bye, Levin Gann PA was itching to get back on the field and to return to their championship form from 2 and 3 years ago.

Trailing 3-0 after the top of the first, LG came back with 3 of their own to tie. However, some costly misplays and lack of timely hitting put LG behind for the next 7 innings. LG headed into the bottom of the 8th down 5, but never down in confidence.

After scoring 4 in the bottom of the 8th and giving up 1 in the top of the 9th, it was showdown time in the bottom of the 9th. Down by 2, Yehuda “Stay Young” Pensak (coming out of retirement from 2 decades ago) led off with a single down the 3rd base line and came into score later in the inning. With the bases loaded and one out, Yaakov “The Spinner” Rappaport walked to force in the tying run. Baruch Glazer then hit a scorching liner to right-center that got down to score AY “Really a SS” Rappaport for the winning run.

AMF Creative came out firing from the 1st inning and never looked back. They were backed by the toughness of Yanky Goldsmith, who survived a violent collision and a previously fractured wrist, (and still managed to hit a 2-run HR) along with a stellar pitching performance. Dan Gutman was unstoppable with his 5-5 performance along with 4 RBIs. Aryeh Wolf went 3-5, also with 4 RBIs; and both Moishy Stal and Binyamin Guttman had 3 hits apiece. AMF Creative controlled Believe and Achieve with lockdown defense and inspired play in an all-around strong team win.

With the drama surrounding the all-night sub-committee deliberations and lack of clarity regarding the very many conflicting weather reports, the media completely neglected to cover what should have been dubbed the Game of the Season with the rematch of the 2021 JCSL championship game.

The Finkelstein Bash brothers of Baltimore along with their very Worthy teammates, were stymied by LBSI future stars Tzvi Perlman, Jesse Meyerowitz and Jake “The Rake” Grayman who went a combined 8 for 12 to hammer home the win.  Steller defense by Moshe Mutterperl and Ari Elman helped solidify the win.

Long time LBSI co-captain and chief advocate Mendy Rauh said after the game, “Sometimes you just need to believe in the young guys and ultimately they will carry the day…”

In the second game of a twin-bill, on a scorching hot day, AMF Creative had to reach deep following a disappointing Game 1 loss. The team didn’t disappoint. AMF rode the shoulders of pitcher Yankie Goldmith, who found his groove and allowed just two runs to a very strong LBSI squad. The offense got started with a 2 RBI single from their senior captain Aaron Friedman. Moishy Stal finished the day 4-4 and Aryeh Wolf went 3-4 with 2-RBI. However, it was the defense that was once again on fire – led by veterans Binyamin Guttman, Binyamin Blackman, and Moishe Treitel.

After dropping the 1st of the two-bill in uncharacteristic fashion, Levin & Gann made sure to straighten itself for its 2nd of the double header vs Worthy Insurance. It was Levin & Gann who was the “worthier” team in this match up as they won via the mercy rule, 13-2. With great defense, pitching and timely hitting from every player, Levin & Gann improved to 2-1 on the season.

In game two of the day’s doubleheader, Believe & Achieve Sports looked to bounce back from an upsetting first game loss. They took an early lead with some fantastic baserunning by speedy Yaakov Furman. After KD tied it up, Binyomin Goldenberg responded for B& A, knocking in a two-run homer. But Goldenberg wasn’t done. In the top of the 6th, with runners on second and third and two outs, he hit a two-strike change-up passed the shift, giving him 4 RNIs for the day and giving B & A a 2-run lead. Captain Meir Parry came in to close it out and pitched KD into a game-ending double play.