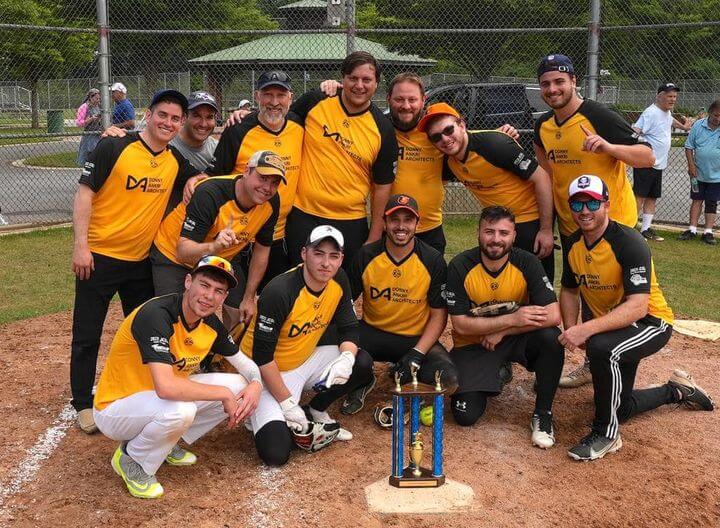 The Jewish Community Softball League by Shimz Cars wrapped up their fourth season on Sunday, July 10th in auspicious fashion with a dramatic battle between teams “Levin and Gann” and “Donny Ankri Architects,” in the “Camp Shoresh” Championship game.

Continue below to read about the excitement from the entire “Camp Shoresh” postseason:
Camp Shoresh Playoffs:

This playoff game pitted the number 1 seed (Stutman Chiropractic) against the number 4 seed (Levin & Gann).  With the Chiropractors closing out their regular season in dominant fashion, most analysts expected an easy win for the Spinal Adjusters. But the law firm of Levin & Gann had different plans.

Thanks to some superb defense (notably by LF Rafi “The Spiderman” Strum who made a Sports Center-esque catch in the outfield), timely hitting by the whole lineup, and solid pitching from captain Yaakov “The Hound Dog” Rappaport, Levin & Gann cruised to victory and entered the JCSL championship for their 3rd time in the 4-year history of the league.

Both Donny Ankri Architects and Believe and Achieve Sports eagerly anticipated this game, with each team excited for the possibility of earning their first birth to a JCSL championship game.

But it was in the bottom of the 4th where The Architects displayed the “team depth” for which they’re developed league recognition, with the bottom of the order stringing together multiple clutch hits, helping to ignite a 6-run inning. Following the 4th, DAA never looked back as punched their ticket to their first Championship game.

LG got off to a strong start scoring, 5 runs in the top of the 1st but DAA answered with 3 runs of their own in the bottom of the 1st, thanks to a hard-hit double by, gold glove outfielder, Josh Zaslow.

Following the fireworks in the 1st, both pitchers, Yaakov Rappaport and Jason Man, (both Cy Young winners on the season) took control of the game, holding both teams scoreless for the next 3 innings.

DAA tacked on a run in the bottom of the 5th thanks to a clutch 2-out double by their captain, Donny Ankri, who scored the speedy Hillel Stutman from first.

In the top of the 6th, LG’s bats woke up and erupted for 4 runs to take a 9-4 lead. As DAA got up to bat in the bottom of the 6th down 5 runs, the DAA fans, donning their yellow/black jerseys were getting nervous. With LG’s all-star pitcher, Rappaport, on the mound, a comeback seemed improbable.

Down a run late in the game, DAA had to keep LG scoreless to keep the game close. With LG having runners at 1st and 3rd and no outs, LG hit a grounder to the pitcher, Jason, but with a throw to first baseman Ken Major to get the runner out and then a strong throw home from Ken to catcher Mayer Goldsmith, DAA got a much needed, and very unconventional, 1-3-2 double play!

With strong defensive plays becoming contagious, LG had another opportunity to pad the lead. With runners on 1st and 2nd, LG hit a blooper to short left field, but with complete disregard for his body, DAA’s shortstop Donny Ankri, sprinted out towards left field and dove backwards making a sensational over-the-shoulder diving catch, barely avoiding a collision with his outfielder, to keep the runner at 2nd.

Now going into the bottom of the 8th, with LG having a 9-8 lead, DAA had to find a way to score on a very experienced LG team. DAA’s fans were flipping their caps inside out in hopes of a late-inning rally. One fan in particular, DAA’s Shmuel Artman, unfortunately had to miss the playoffs due to a sports injury. Shmuel was cheering on his team and started an unprecedented 4 round crowd wave! DAA heeded the call and started the inning strong getting hits from Lavi and Gedalia Gelb to put runners on 2nd and 3rd with one out. Thanks to more clutch hitting, DAA got a single to tie the game by Moshe Wealcatch, and then Adam Ben-Zev hit a deep towering sacrifice fly to take the 10-9 lead. It was now the top of the 9th, with the game on the line and it was LG’s turn.

LG quickly got a runner one 2nd base and with one out, DAA made the tough decision to intentionally walk one of their best hitters, Rafi Strum. LG’s next hitter hit a hard line-drive which was caught by 2nd baseman, Lavi. Two outs. LG’s next power hitter approached the plate. The stadium went silent. Tension was in the air. The pitch came in and was CRUSHED to deep center. DAA’s center fielder, Moishe Abramson, raced over and, with ice in his veins, kept his focus to catch the last out sending Donny Ankri Architects to their first ever Championship victory in 5 seasons!