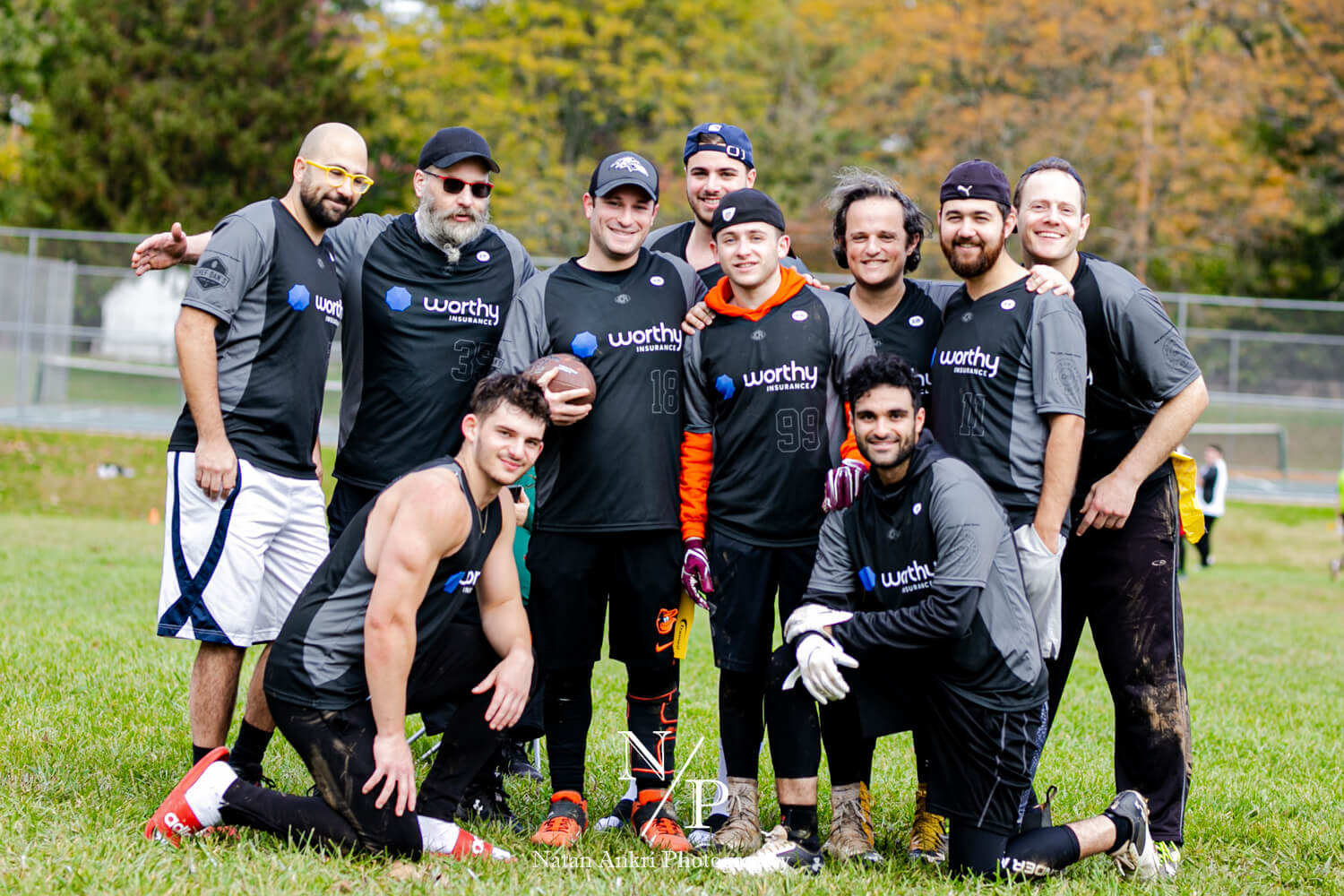 With 8 strong teams participating in the 2022 season, the Chef Dan title is still very much so up for the taking.

After a month off between Games 1 and 2, there was some noticeable rust (and holiday weight) that the players needed to shed. The game featuring Worthy Insurance and Iconic Builders reminded some of Thursday Night Football, thanks to a lack of scoring. Although the final score looks boring, the game was anything but.

Worthy scored a touchdown on the 2nd drive of the game, a beautiful 30 yard catch by stud WR Moshe Gutman over the leaping reach of IB Captain, AB Reznick. Megatron Scheinfeld went up high between 2 defenders for the 2-point conversion giving Worthy the 8-0 lead.

But it was the defenses that shined in this one. The Worthy defense stifled IB all day, intercepting 5 passes, but they couldn’t capitalize on offense, with multiple turnovers of their own and a couple of drops.

With time running out and the game on the line, Iconic scored a touchdown after an impressive drive but was ultimately stopped on the 2-point attempt, sealing the win for Worthy Insurance.

Sushi Sakura opened with early TDs to Chaim Fink and Ezra Rosen and went into the half up 13-6. After a quick TD for Dr Auto to start the second half, both teams’ offenses slowed down.

With two minutes left, Dr Auto QB Ari Hettleman scored on a deep touchdown pass to put them up 18-13. On the next drive, Sushi Sakura QB Ezra Bregin drove down the field and completed a TD pass on third down to Yehuda Morris. With under a minute left in a do or die situation for Doctor Auto, Chaim Fink picked off Hettleman to seal the game 26-18.

In a matchup of 2 teams coming off wins, Tripping Kosher got started early and didn’t look back. Mordi Reches scored 2 quick touchdowns to give TK the early lead. After a fourth down stop before the half, TK moved the ball downfield hitting Aryeh Pleeter and Reches for chunks of yardage, culminating in a TD to Avromi Freund.

The second half brought more of the same. Tripping Kosher didn’t give up a sack, thanks to strong offensive line play by Avi Press, Mordechai Green and Freund. On DL, Freund and Baruch Dollman applied pressure all morning long. The game concluded with TK taking the dominant win.

Back in August, Worthy Insurance and Doctor Auto shocked the rest of the league with a blockbuster trade on Draft Night. Doctor Auto had the 1st overall pick, and with young stallion and first-time drafter Ari Hettleman leading the charge, the plan was to draft another young buck, rookie stud Yeshaya Lerner 1st overall. Worthy Insurance, led by Chaim Finkelstein, wanted to draft former teammate and consensus #1 pick Shloime “Megatron” Scheinfeld, but held the 5th pick and knew Scheinfeld wouldn’t be available. After a lengthy conversation between the captains, Hettleman realized he could draft Lerner 5th overall, so the teams secretly agreed to swap 1st round picks, with Worthy throwing in an additional 4th rounder. Both teams got their guy and a friendly rivalry was born!

Fast forward to the first play of Week 3. Finkelstein pump-faked short to the left, then threw a 50-yard bomb to a streaking Scheinfeld down the right sideline for an easy touchdown. After a quick 3 and out by Dr Auto, Worthy took over. On their second possession, the plan was simple: KEEP FEEDING MEGATRON! On 1st down, Finkelstein pump-faked to the left and hit Scheinfeld down the right sideline for a 25-yard completion. On the next play, Scheinfeld caught a 25-yard touchdown between 2 defenders in the middle of the endzone. Yoni Finkelstein caught the 2-point conversion, giving Worthy a 14-0 lead. Yoni came right back with an interception on the 2nd play of the ensuing drive, giving Worthy great field position, but they couldn’t punch it in. Dr. Auto finally got on the board with an impressive touchdown drive of their own, cutting the lead to 14-6. But these would be the only offensive points they would score all day.

The next drive for Worthy opened with a 10-yard QB run, then another patented Finkelstein pump-fake and 40-yard touchdown throw to Scheinfeld, his 3rd of the day. The Finkelstein brothers connected once again for the 2-point conversion, increasing the lead to 22-6. Dr. Auto drove the ball downfield again but OG Safety, Ouriel Nafisi beautifully undercut a route in the endzone and intercepted the pass. Neither team scored on their next possessions, but Dr. Auto got some life back with an incredible defensive play of their own. Rookie sensation Sam “The Palpitating Llama” Novograd intercepted a pass, kept his feet in bounds, broke a few tackles, tiptoed down the sideline, and returned it for a touchdown cutting the lead to 22-12. But Worthy didn’t flinch and went back to what was working: MEGATRON! He had a 10 yard catch to start the drive and then, a pump-fake followed by a 40-yard touchdown. But on the 2-point attempt, Novagrad made another great defensive play and had a rare pick-2.

The score at halftime was 28-14. Dr. Auto didn’t have an answer for Scheinfeld and the unselfish attitude of the Worthy players meant that they would keep feeding him. Dr. Auto started with the ball and got into the redzone, but Rami “Not the Supermarket” Lavi sacked Hettleman on 4th down, his 3rd sack of the game. On the ensuing possession, Finkelstein ran for a 30-yard gain. The next play, Scheinfeld put a move on the defender and caught his 5th touchdown of the game! After an offensive penalty on the 2-point try, the score was 34-14.

On the very next play, Worthy cornerback Pasey Wealcatch had a tremendous interception. He baited the QB to throw his way, jumped the route, and caught the ball diving to the sideline while keeping his feet in bounds. Yoni Finkelstein followed that up with another touchdown catch for Worthy, giving them a 40-14 lead. On the next drive, Wealcatch deflected a pass in the direction of Chaim Finkelstein, who caught the interception and almost returned it to the house. The game ultimately ended via the mercy rule.

Looking to move to 3-0, Tripping Kosher came up big again. On the first possession, Mordy Reches came up with a huge INT. TK didn’t waste time getting in the end zone, as QB Shulie Hochman ran a 40-yard TD with great blocking along the way. After a Mookie Chamdi pick, TK went into the half up 7-0.

In the second half, TK pulled away to collect their 3rd straight win. TK’s defense was the difference in this one, with Hochman, Reches and Chamdi combining for 5 INTs and great QB pressure from Avromi Freund and Baruch Dollman.