Grief and Gratitude for a Woman of Valor 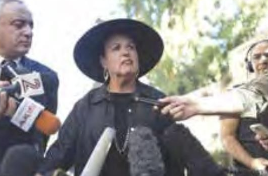 I knew him well but had never met him in person. The first time I laid eyes on Jonathan Pollard was as I watched him slowly follow his wife’s body to the van that would transport her to the gravesite at the conclusion of her funeral at Har HaMenuchot Cemetery in Jerusalem.

Thousands of people attended Esther Pollard’s funeral and the crowd stretched as far as the eye could see. An incredible array of people stood united in grief and gratitude for a woman of valor who never stopped fighting for what she believed in and what was right.

Jonathan Pollard’s saga is well known. He received an unprecedented life sentence for passing classified information to Israel, an ally of the United States. Jonathan spent thirty long years languishing in a federal prison before his release in 2015, after which time he was subject to onerous parole conditions. In November 2020, the U.S. Justice Department declined to extend his parole, thereby paving the way for Jonathan and Esther to finally return home to Israel in December 2020.

I was introduced to Esther Pollard in 2010 by Rabbi Pesach Lerner, a close confidant and advisor to the Pollards, and I quickly became involved in the effort to secure Jonathan’s release. Over the course of many years, I was privileged to play a pivotal role in the communications and public relations effort in the United States that was overseen by Esther Pollard.

I was intimately familiar with the facts of Jonathan’s case and well aware of the array of prominent government officials, high-ranking individuals in the national intelligence arena, legal professionals, and religious and communal leaders who called attention to Jonathan’s plight, underscored his grossly disproportionate sentence, and noted that he had publicly and privately expressed remorse.

Esther displayed a sense of dogged determination in her relentless quest for justice for her husband. She was deeply involved in the enduring efforts on Jonathan’s behalf and her steadfast advocacy resonated around the globe. As far as my role on the communications front, Esther was always very particular about how she wanted things written and said, all because she had Jonathan’s best interests at heart.

I felt it was fortuitous that I was in Israel at the time of her passing, which enabled me to attend her funeral and pay a condolence call to Jonathan.

I walked into the Pollards’ apartment in Jerusalem the day after Esther’s funeral and took a seat among the many other people who were there to be menachem avel. For a while I just sat and listened to the discourse, which I found fascinating. I was immediately struck by the connection that people felt to Esther and Jonathan, even if they did not know them personally. One woman told Jonathan how she had hung up a photo of him in each of her children’s rooms as they were growing up and how they constantly prayed for his release. Another woman became emotional while speaking about what Jonathan’s saga and his eventual freedom meant to her. It was a room full of strangers who were united in their heartfelt connection to the Pollards.

When Jonathan spoke to the people in the room, it was captivating. People were peppering him with questions about various subjects, including Esther, Israel, antisemitism, and the current state of the Jewish people. Jonathan took the time to answer each question and offered insightful thoughts on each topic, and all of us were hanging on his every word.

Yet it was his perspective on his beloved wife Esther and the invaluable role she played in his life that was most compelling. She always helped him put things in perspective, he said as he expressed the resolve to honor her memory by living life as a committed Jew in the State of Israel.

He recounted a story about how he and Esther once encountered a rabbi in New York City who approached them and asked for forgiveness, explaining that he could have helped Jonathan years earlier, but failed to do so. Jonathan told us how he was ready to give him a piece of his mind when Esther intervened and stopped him, explaining that there was no need to engage.

One of the visitors asked Jonathan what he will most about Esther. His response? “Everything.”

When the opportunity presented itself, I moved up to the chair directly in front of Jonathan and told him who I was. His face immediately broke out in a knowing smile, and he reached out to vigorously shake my hand. I told him how much it meant to me to have had the opportunity to work with Esther, who was a tireless and effective advocate for him, and I offered him words of comfort.

As I sat in the shiva house and reflected on my experiences with the Pollards over the years, I considered the indispensable role that Esther played in Jonathan’s life. She was his right hand, his biggest cheerleader, teacher, and motivator. They shared an unbreakable and special bond, and even when they were physically apart, they remained together in their hearts and minds.

The world lost a great woman and Jonathan sadly lost his soulmate. It was an honor to have known and worked with such an intrepid and principled pursuer of justice. May her memory be a blessing.

N. Aaron Troodler is the principal of Red Apple Strategies, LLC, a public relations and strategic communications firm, and has extensive experience in the Jewish non-profit world. Follow him on Twitter: @troodler